Guys here is my official statement regarding the potential Season 6 of NBC’s cancelled show Community: I don’t think it’s necessary, but I am beyond excited that it has the potential to happen.

Here is an actual statistic: the Community Review and Hulu Opting Out of Season 6 Talks are my 2 most viewed articles on the site. And the latter was just posted 3 days ago. It’s amazing that you guys who are reading them seem to support the show too! But anyway, after my Hulu Season 6 discussion, I got a couple questions, mostly from my friends, asking, “why do you care that this show gets revived?”. That is a valid point. I tried to stress in my review how great the show is, but I guess here I’ll more or less spell out why a Season 6 of Community would be awesome. I will do a review of Friends next week and I’m watching Orange is the New Black, so there will plenty of different comedies to discuss soon, but until then, Community it is!

From here forward, I’ll be listing out the reasons why a Season 6 of Community should happen.

The Self-Referential Humor – if you saw the Season 5 Premiere Repilot, or the Season 5 Finale Basic Sandwich, you’ve seen that this show does a great job at making fun of itself. The Season 5 Finale especially just shows that perfectly. “If we save Greendale, what Greendale will we be saving?”, “We’ll definitely be back next year”, “…bankrupt, unmarketable, still on the permanent chopping block”, “…this is our show. And it’s not over”. These are all actual lines from the Season 5 finale that are references to the show’s eternity in limbo and inevitable cancellation. Can you imagine all of the jokes that the Season 6 Premiere would have on a different network or the Internet? Meta to say the least.

If It’s Online, The Upgraded Writing – If the show does move to Hulu, because there are still rumors that could happen, then it would become a premium show with more cursing availabilities and adult content available. I’m pretty certain that Dan Harmon wouldn’t make it downright HBO level, but I think there would definitely be more adult-based things, and who wouldn’t love to see those?

The Future of Television – I have a prediction that is already somewhat grounded in reality. We’ve all heard that sites like Netflix and Hulu are the future of television, and in 20 years all TV will be streamed online. Well when that happens, the providers of those shows will be getting paid for subscriptions. Think of that statement this way: imagine Netflix, Hulu, HBO Go and Amazon Prime as different stations. Each has the rights to certain programs, but there are many shared programs between some of the 4. Judging off that, you would have to assume that people would only pay for the ones they want, i.e. only Netflix, or HBO Go and Amazon Prime but not Hulu or Netflix. Then each network could take in the money from subscriptions to choice networks and produce content based on creative choices. For instance, when a show starts to lack in creativity, that’s when it’s cancelled, not when people stop watching it. I understand that this is a complete matter of opinion and recognize not every show I hate will be cancelled. Pretty Little Liars has a good teenage female audience that watches it every week and would subscribe to see it. Okay, keep it around. But if there’s a show like last year’s Sean Saves the World, then it deserves the axe nearly out of the gate. This would put Community ahead of the game and show that fan-service and creative humor matter on a show. Not just how many views it gets, which was always an issue for Community.

So this will probably be my last post about Community until it’s either revived next week or put down for good. I don’t know what it is, but I have faith in this show. As I said, the reason why I love it as much as I do is because it became the most fan-interactive show to ever be on the air. Sure you can enter contests to go to the American Idol finale, or be the Bones Fan of the Week, but Community was a program that put its actual fate in the hands of its viewers, and that is power that each TV show should be lucky to give. And that’s what makes my favorite line from Abed throughout the show one of my favorite lines in television history. “It isn’t just their show. This is our show. And it’s not over.”

So after many Community based posts, those are my three basic thoughts on why there should be a sixth season of the NBC critical darling and viewership flop. Have you guys seen Community yet? If not, click here to check out my actual review, or you can click here and see my predictions of where a sixth season could potentially go. So what show do you wish had another season? Community is actually not my first choice pick for that question, but it will be answered soon enough. Guess what it is though! Leave those guesses and answers down below, and as always, thanks for reading guys.  #sixseasonsandamovie 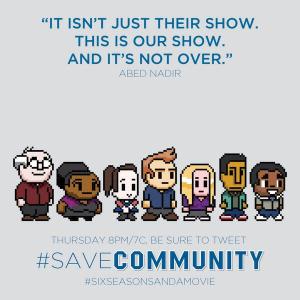 One thought on “Reasons Why Community Deserves a Sixth Season”